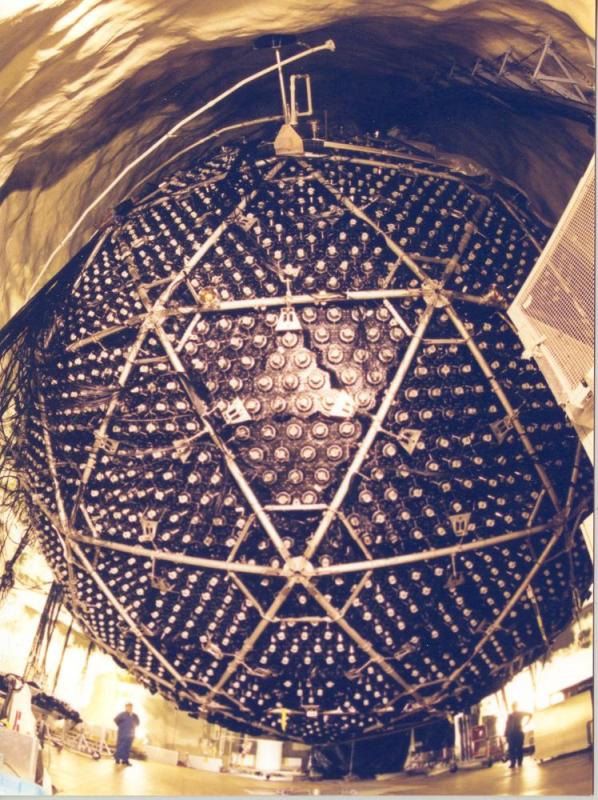 The Sudbury Neutrino Observatory (SNO)[1] is a neutrino observatory located about 2 km underground in Vale Inco’s Creighton Mine in Sudbury, Ontario, Canada. The detector was designed to detect solar neutrinos through their interactions with a large tank of heavy water. The detector was turned on in May 1999, and was turned off on 28 November 2006. While new data is no longer being taken, the SNO collaboration will continue to analyze the data taken during that period for the next several years. The underground laboratory has been enlarged and continues to operate other experiments at SNOLAB.

The first measurements of the number of solar neutrinos reaching the earth were taken in the 1960s, and all experiments prior to SNO observed a third to a half fewer neutrinos than were predicted by the Standard Solar Model. As several experiments confirmed this deficit the effect became known as the solar neutrino problem. Over several decades many ideas were put forward to try to explain the effect, one of which was the hypothesis of neutrino oscillations. All of the solar neutrino detectors prior to SNO had been sensitive primarily or exclusively to electron neutrinos and yielded little to no information on muon neutrinos and tau neutrinos.

In 1984, Herb Chen of the University of California at Irvine first pointed out the advantages of using heavy water as a detector for solar neutrinos. Unlike previous detectors, using heavy water would make the detector sensitive to two reactions, one sensitive to all neutrino flavours, which would allow a detector to measure neutrino oscillations directly. The Creighton Mine in Sudbury, among the deepest in the world and accordingly low background radiation, was quickly identified as an ideal place for Chen’s proposed experiment to be built.

The SNO collaboration held its first meeting in 1984. At the time, it competed with TRIUMF’s KAON Factory proposal for federal funding, and the wide variety of universities backing SNO quickly led to it being selected for development. The official go-ahead was given in 1990.

Apart from the fact that the nature of the experiment is at the cutting edge of particle physics, the depth of the laboratory and complexity of the equipment make it worthy of inclusion.  My interest in this project stems from visits in the 1970’s to the TRIUMF[2] laboratory in Vancouver, British Columbia, mentioned above and design work conducted for them on small high pressure filament-wound composite vessels to be used in radiation experiments.

1. The above information was edited from the Wikipedia article URL: https://en.wikipedia.org/wiki/Sudbury_Neutrino_Observatory
2. TRIUMF houses the world’s largest cyclotron and is Canada’s national laboratory for particle and nuclear physics. It is located on the campus of the University of British Columbia in Vancouver, British Columbia.