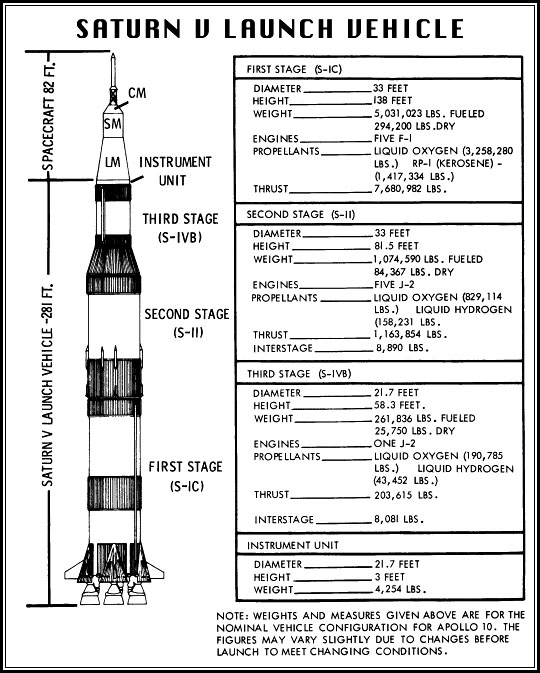 The Saturn V was used in the Apollo program in the 1960s and 1970s. It also was used to launch the Skylab space station.  The manned Apollo missions were each launched aboard a Saturn V launch vehicle. The “V” designation originates from the five powerful F-1 engines that powered the first stage of the rocket. The Saturn V remains the largest and most powerful U.S. expendable launch vehicle ever built.

The Saturn V launch vehicle itself consisted of three stages:

First Stage (S-IC): The first stage includes the five F-1 engines producing nearly 7.7 million pounds of thrust. These powerful engines are required to lift the heavy rocket fast enough to escape Earth’s gravity. The first stage engines are burned at lift-off and last for about 2.5 minutes taking the vehicle and payload to an altitude of 38 miles. The first stage then separates and burns up in the Earth’s atmosphere.

While working in Florida in the early 1970’s, I had the opportunity to drive to the Cape Kennedy Space Center and witness, from a distance, the launch of one of the later Apollo missions using the Saturn V launch vehicle.  It was one of the most awe-inspiring spectacles that I have ever experienced.  From a distance of several kilometres, I saw the vehicle slowly and silently gathering speed as it accelerated into the sky.  Suddenly the noise of the five giant engines reached me and my whole body reverberated from the enormous waves of sound.  The bright flames were still clearly visible as it gained height and then disappeared, but the sound was still audible.