The Pantheon of Rome, Italy. 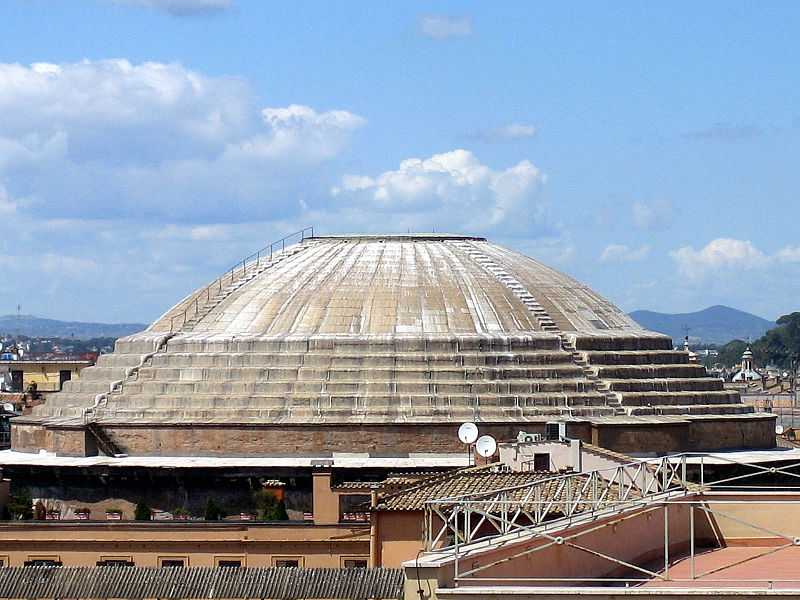 The Latin name Pantheon from the Greek: Πάνθεον (meaning “to all the gods”), is a building in Rome, Italy, commissioned by Marcus Agrippa during the reign of Augustus (63 BCE – 14 CE), the first emperor of The Roman Empire, as a temple to all the gods of ancient Rome. It was destroyed by fire in 80 CE and rebuilt in its present form with the dome by the emperor Hadrian about 126 AD.

The following description is taken from Wikipedia (link below). The building is circular with a portico of large granite Corinthian columns (eight in the first rank and two groups of four behind) under a pediment. A rectangular vestibule links the porch to the rotunda, which is under a coffered concrete dome, with a central opening (oculus) to the sky. Almost two thousand years after it was built, the Pantheon’s dome is still the world’s largest unreinforced concrete dome. The height to the oculus and the diameter of the interior circle are the same, 43.3 metres.

It is one of the best-preserved of all Roman buildings. It has been in continuous use throughout its history, and since the 7th century, the Pantheon has been used as a Roman Catholic church dedicated to “St. Mary and the Martyrs” but informally known as “Santa Maria Rotonda”.

A detailed description may be found at the following URL: http://en.wikipedia.org/wiki/Pantheon,_Rome