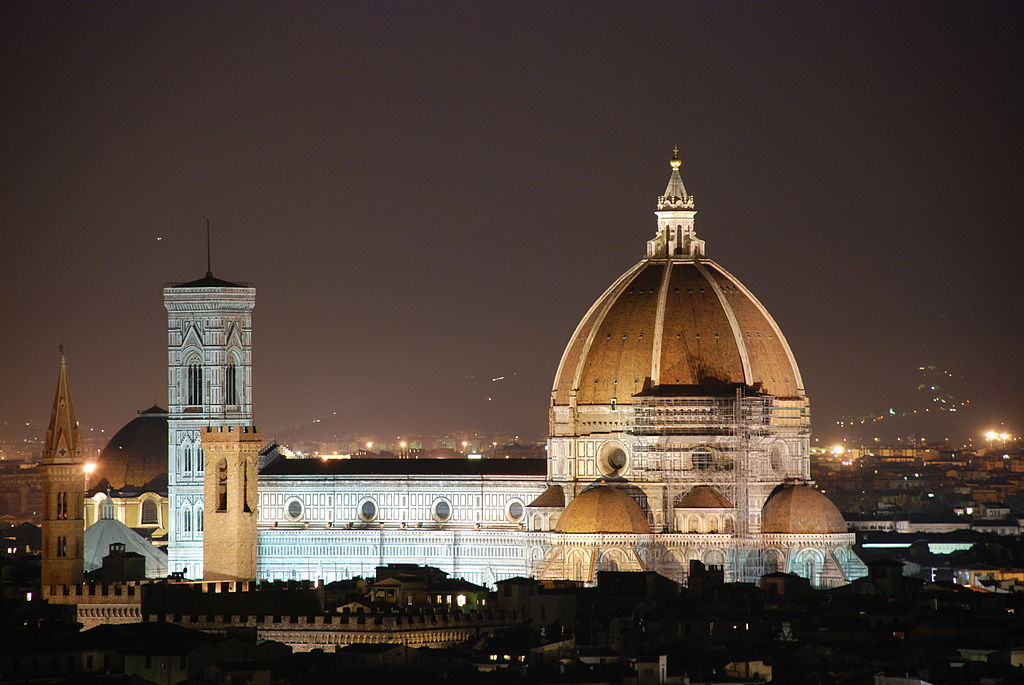 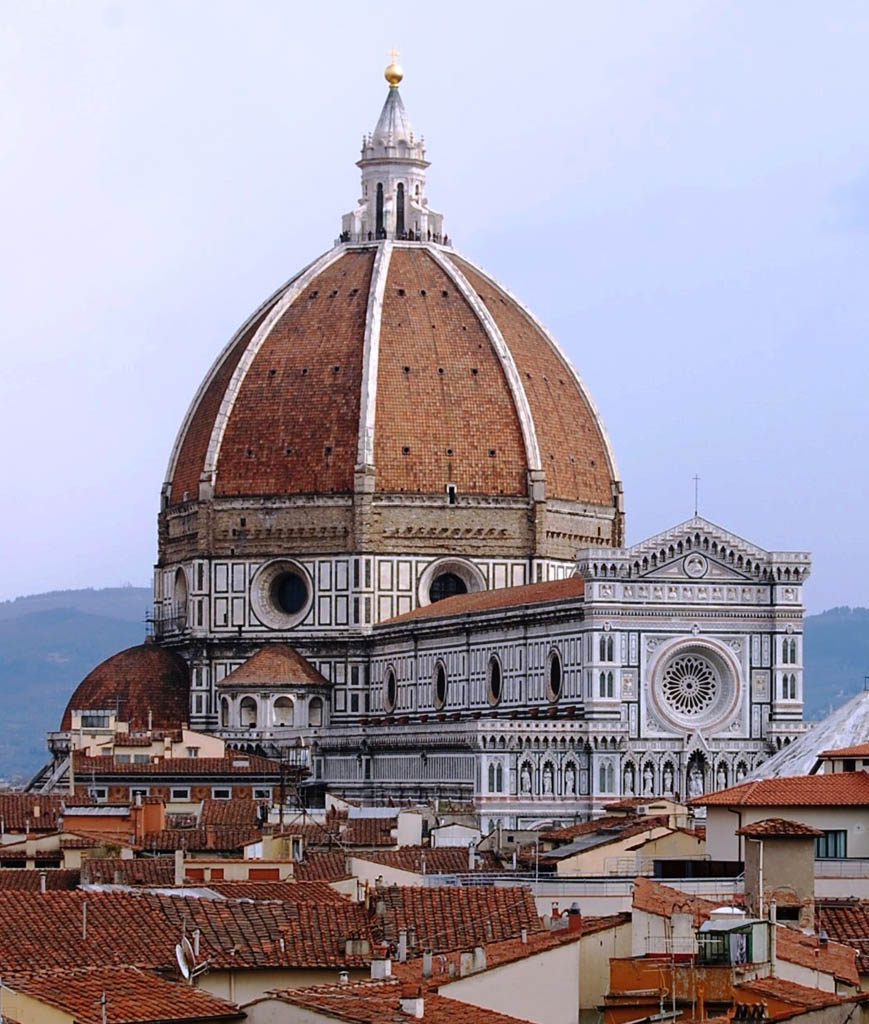 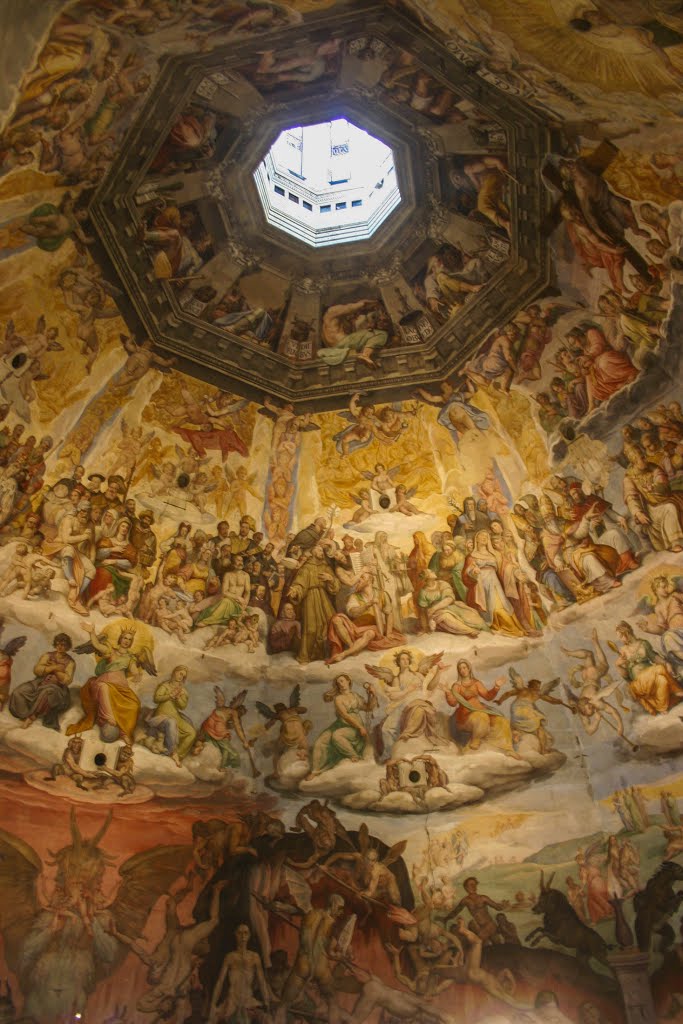 The Florence Cathedral, known as the The Basilica di Santa Maria del Fiore, has a dome, which is a magnificent example of architecture and engineering. Several years ago I came across a book[1] which tells the story of its conception and the difficulties in the construction of this late mediaeval marvel. Although not a history buff, I was enthralled. Because records were kept, we can learn every detail. The construction of the cathedral in Florence had started in 1296 and, after more than 100 years was almost complete except for the dome. The main problem was to design a dome that could span the more than 42 metres on top of a 54 metre high octagonal barrel already built to support it. No dome then existed that was this wide except the ancient Pantheon which spans 43 metres, but it is made of concrete and supported on much lower massively thick walls, needed to take the outward-acting forces. On 18 August 1418, the Arte della Lana[2] announced a structural design competition for erecting the dome as the shape of which had been designed by an earlier architect called Neri. The competition was won by Filippo Brunelleschi[3] and the construction of the dome began in 1420 and was finished by 1436. The lantern, also designed by Brunelleschi, was completed after his death. The copper sphere was placed on the top by Verrocchio[4] in 1472. The octagonal drum carries eight ‘shells’. Empty spaces have been left inside each of these to lighten the massive structure. The angle ribs are not intended to provide structural support. It is possible to ascend to the top of the main dome by internal stairways and in the above lower left picture, people are visible on the walkway surrounding the lantern. Another notable feature is the external covering system, which consists of tiles specially designed for easy assembly and maintenance. The dome weighs an estimated 37,000 metric tons, and the number of bricks used in the structure may exceed four million. This dome is still the largest dome made from bricks and mortar in the world.

A detailed description may be found at the following URL: https://en.wikipedia.org/wiki/Florence_Cathedral

1. Ross King, Brunelleschi’s Dome: How a Renaissance Genius Reinvented Architecture, Penguin Books, 2001.
2. The Arte della Lana was the Wool Guild of Florence during the Late Middle Ages and in the Renaissance. It was one of the wealthiest institutions involved in banking and supporting public projects.
3. Filippo Brunelleschi (1377 – April 15, 1446) was one of the foremost architects and engineers of the Italian Renaissance and was made famous for his development of linear perspective and for engineering the dome of the Florence Cathedral, but his accomplishments also include other architectural works, sculpture, mathematics, engineering and even ship design. The construction of the dome began in the summer of 1420 and was finished by 1436. The lantern, also designed by Brunelleschi, was completed after his death. The copper sphere was placed on the top by Verrocchio in 1472.
4. Andrea del Verrocchio (ca. 1435 – 1488) was an Italian sculptor, goldsmith and painter, who was master of an important workshop in Florence. A number of important painters were trained at his workshop including Leonardo da Vinci.