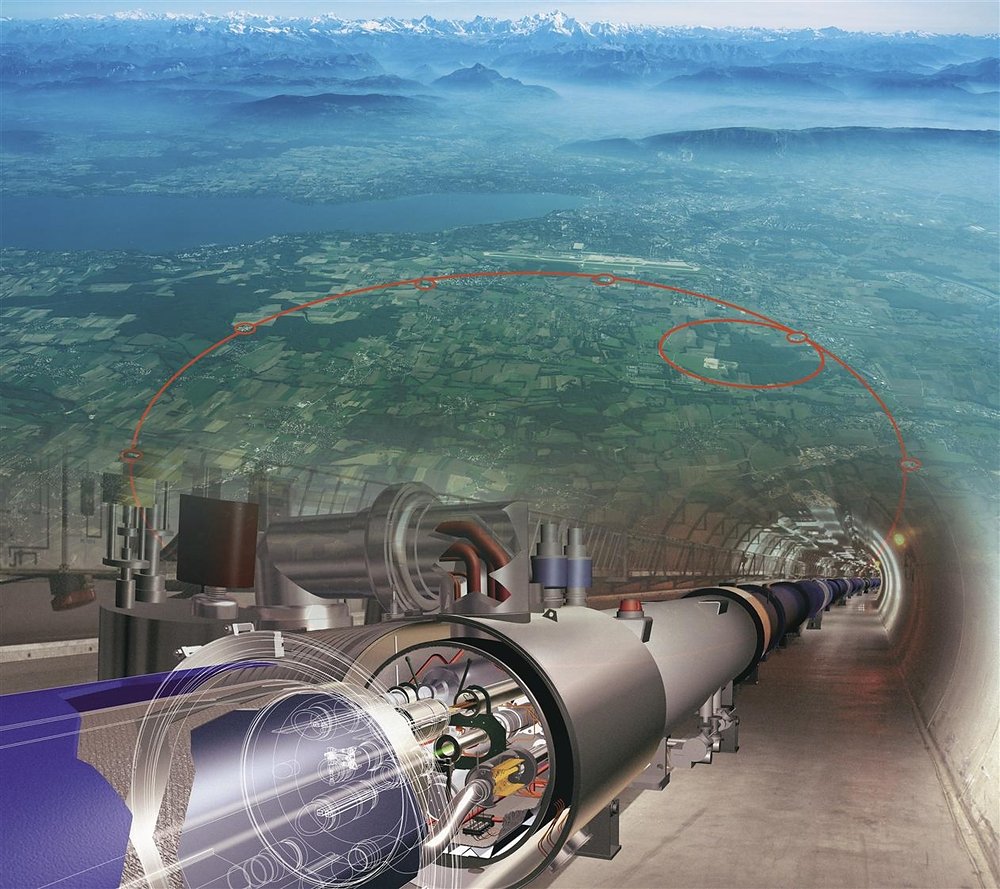 The Large Hadron Collider (LHC)[1][2] is the highest-energy particle collider ever made and is considered as “one of the great engineering milestones of mankind”. It was built by the European Organization for Nuclear Research (CERN) from 1998 to 2008, with the aim of allowing physicists to test the predictions of different theories of particle physics and high-energy physics, and particularly prove or disprove the existence of the theorized Higgs particle and of the large family of new particles predicted by supersymmetric theories. The Higgs particle was confirmed by data from the LHC in 2013. The LHC is expected to address some of the unsolved questions of physics, advancing human understanding of physical laws. It contains seven detectors each designed for specific kinds of exploration.

The LHC was built in collaboration with over 10,000 scientists and engineers from over 100 countries, as well as hundreds of universities and laboratories. It lies in a tunnel 27 kilometres in circumference, as deep as 175 metres beneath the Franco-Swiss border near Geneva, Switzerland.
As of 2012, the LHC remains one of the largest and most complex experimental facilities ever built. Its synchrotron is designed to initially collide two opposing particle beams of either protons at up to 7 teraelectronvolts (7 TeV or 1.12 microjoules) per nucleon, or lead nuclei at an energy of 574 TeV (92.0 µJ) per nucleus (2.76 TeV per nucleon-pair), with energies to be doubled to around 14 TeV collision energy – more than seven times any predecessor collider – by around 2015. Collision data was also anticipated to be produced at an unprecedented rate of tens of petabytes per year, to be analysed by a grid-based computer network infrastructure connecting 140 computing centers in 35 countries (by 2012 the LHC Computing Grid was the world’s largest computing grid, comprising over 170 computing facilities in a worldwide network across 36 countries).

The LHC went live on 10 September 2008, with proton beams successfully circulated in the main ring of the LHC for the first time, but 9 days later a faulty electrical connection led to the rupture of a liquid helium enclosure, causing both a magnet quench and several tons of helium gas escaping with explosive force. The incident resulted in damage to over 50 superconducting magnets and their mountings, and contamination of the vacuum pipe, and delayed further operations by 14 months. On November 20, 2009 proton beams were successfully circulated again, with the first recorded proton–proton collisions occurring 3 days later at the injection energy of 450 GeV per beam. On March 30, 2010, the first collisions took place between two 3.5 TeV beams, setting a world record for the highest-energy man-made particle collisions, and the LHC began its planned research program.

By November 2012, the LHC had discovered two previously unobserved particles (the χb (3P) bottomonium state and a massive 125 GeV boson (which subsequent results confirmed to be the long-sought Higgs boson), created a quark–gluon plasma, and recorded the first observations of the very rare decay of the Bs meson into two muons (Bs0 → μ+μ-) (a major test of supersymmetry).  The LHC operated at 3.5 TeV per beam in 2010 and 2011 and at 4 TeV in 2012. It operated for two months in 2013 colliding protons with lead nuclei, and went into shutdown for upgrades to increase beam energy to 6.5 TeV per beam, with reopening planned for early 2015.

1. The above information was edited from the Wikipedia article URL:  https://en.wikipedia.org/wiki/Large_Hadron_Collider
2. LCH web site: https://home.web.cern.ch/about/accelerators/large-hadron-collider