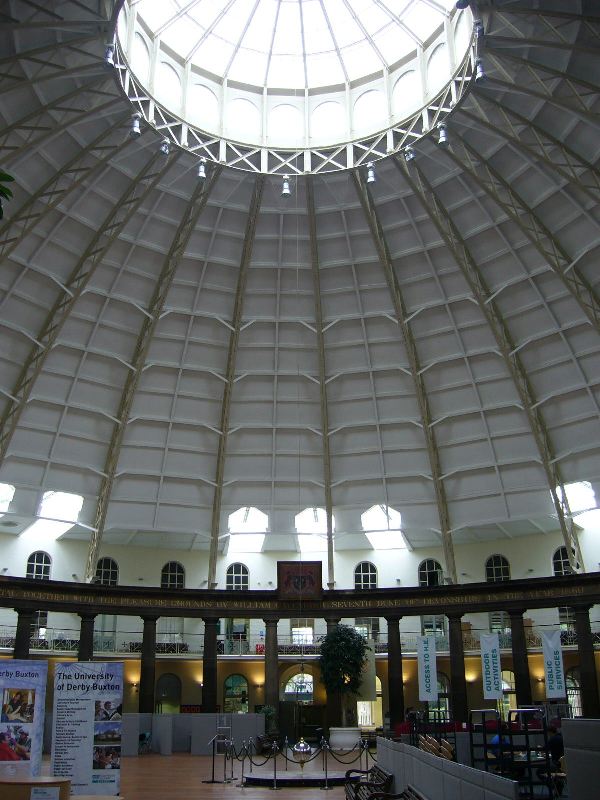 Although not ancient, the Devonshire dome is notable because it broke the record for the largest unsupported dome with a diameter of 44.2 metres. In fact it was the first to surpass that of the Pantheon (43 metres). It was overtaken by the iron and glass dome of the West Baden Springs Hotel in Indiana, U.S.A. designed by Harrison Albright in 1902 (59.45 metres). These and later records have been surpassed by space frame domes, such as the steel Louisiana Superdome (207 metres), the Georgia Dome (256 metres) and even larger sports domes. However, the Devonshire is still the largest unsupported dome in the UK. The dome was built as an adjunct to stables which had originally been built between 1780 and 1789 for William Cavendish, 5th Duke of Devonshire as part of the plan to promote Buxton as a spa town. In 1859, two thirds of the buildings were converted to a charity hospital. In 1881 William Cavendish, 7th Duke of Devonshire was persuaded allow the use of the whole building in exchange for providing new stables elsewhere in the town. Local architect Robert Rippon Duke was commissioned to design a 300-bed hospital for the provision of charity medical services. He added what was then the world’s largest unsupported dome, consisting of an iron structural frame clad in slate. The choice of slate for the cladding followed century’s old roofing practice and provided a low maintenance waterproof cover. It has a very low water absorption of less than 0.4%, making it resistant to frost damage. Further changes and developments were undertaken, with the clock tower and lodge completed in 1882, surgical wards in 1897, spa baths in 1913, and the dining room and kitchens in 1921. The building became known as the Devonshire Royal Hospital in 1934. It closed in 2000 and on 31 January 2001, the University of Derby acquired the Devonshire Royal Hospital and carried out restoration and redevelopment with a fund of £4.7m from a Heritage Lottery.

A detailed description may be found at the following URL:
www.devonshiredome.co.uk/