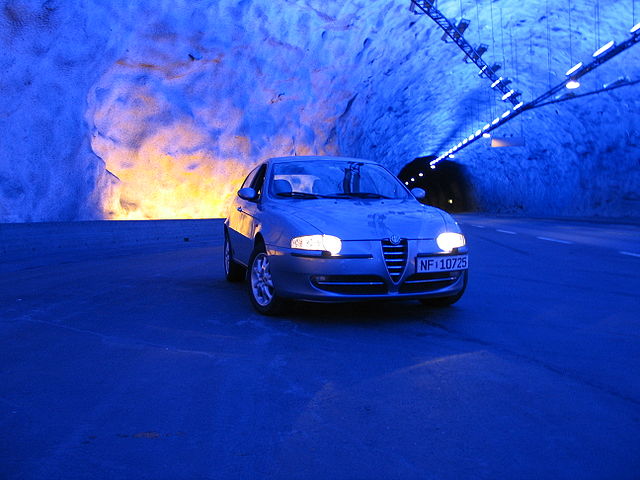 Lærdal Tunnel (Norwegian: Lærdalstunnelen)[1] is a 24.51-kilometre long road tunnel connecting Lærdal and Aurland in Sogn og Fjordane, Norway and located approximately 175–200 kilometres north-east of Bergen. It is the longest road tunnel in the world succeeding the Swiss Gotthard Road Tunnel. The tunnel carries two lanes of European Route E16 and represents the final link on the new main highway connecting Oslo and Bergen without ferry connections and difficult mountain crossings during winter.

In 1975, the Parliament of Norway decided that the main road between Oslo and Bergen would run via Filefjell. In 1992, Parliament confirmed that decision, took a further decision that the road should run through a tunnel between Laerdal and Aurland and passed legislation to build the tunnel. Construction started in 1995 and the tunnel opened in 2000. It cost 1.082 billion Norwegian krone ($113.1M USD).

A total of 2,500,000 cubic metres of rock was removed from the tunnel during its construction from 1995 to 2000. The tunnel begins just east of Aurlandsvangen in Aurland, goes through a mountain range and ends 5.5 kilometres south of Lærdalsøyri in Lærdal. The design of the tunnel takes into consideration the mental strain on drivers, so the tunnel is divided into four sections, separated by three large mountain caves at 6-kilometre intervals. While the main tunnel has white lights, the caves have blue lighting with yellow lights at the fringes to give an impression of sunrise. The caves are meant to break the routine, providing a refreshing view and allowing drivers to take a short rest. The caverns are also used as turn around points and for break areas to help lift claustrophobia during a 20-minute drive through the tunnel. To keep drivers from being inattentive or falling asleep, each lane is supplied with a loud rumble strip toward the center.

The tunnel does not have emergency exits. In case of accidents and/or fire, many safety precautions have been made. There are emergency phones marked ‘SOS’ every 250 metres, which can contact the police, fire departments, and hospitals. Fire extinguishers have been placed every 125 metres. Whenever an emergency phone in the tunnel is used, stop lights and electronic signs reading:  snu og køyr ut (English: turn and drive out) are displayed throughout the tunnel. There are 15 turning areas which were constructed for buses and semi-trailers. In addition to the three large caverns, emergency niches have been built every 500 metres. There are photo inspections and counting of all vehicles that enter and exit the tunnel at security centers in Lærdal and Bergen. There is also special wiring in the tunnel for the use of radio and mobile phones. Speed cameras were later installed because of serious speeding (there are very few other completely straight roads in the region).

High air quality in the tunnel is achieved in two ways: ventilation and purification. Large fans draw air in from both entrances and polluted air is expelled through the ventilation tunnel to Tynjadalen. The Lærdal Tunnel is the first in the world to be equipped with an air treatment plant, located in a 100-metre wide cavern about 9.5 kilometres northwest of Aurlandsvangen. The plant removes both dust and nitrogen dioxide from the tunnel air. Two large fans draw air through the treatment plant, where dust and soot are removed by an electrostatic filter. Then the air is drawn through a large carbon filter which removes the nitrogen dioxide.

1. The above information was edited from the Wikipedia article URL: https://en.wikipedia.org/wiki/L%C3%A6rdal_Tunnel