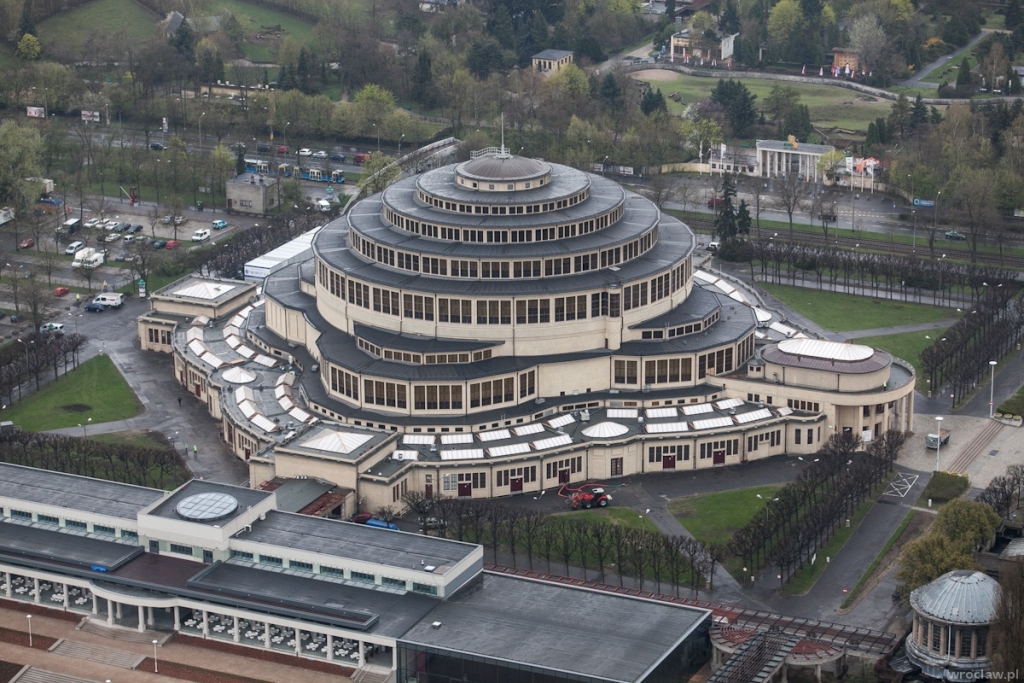 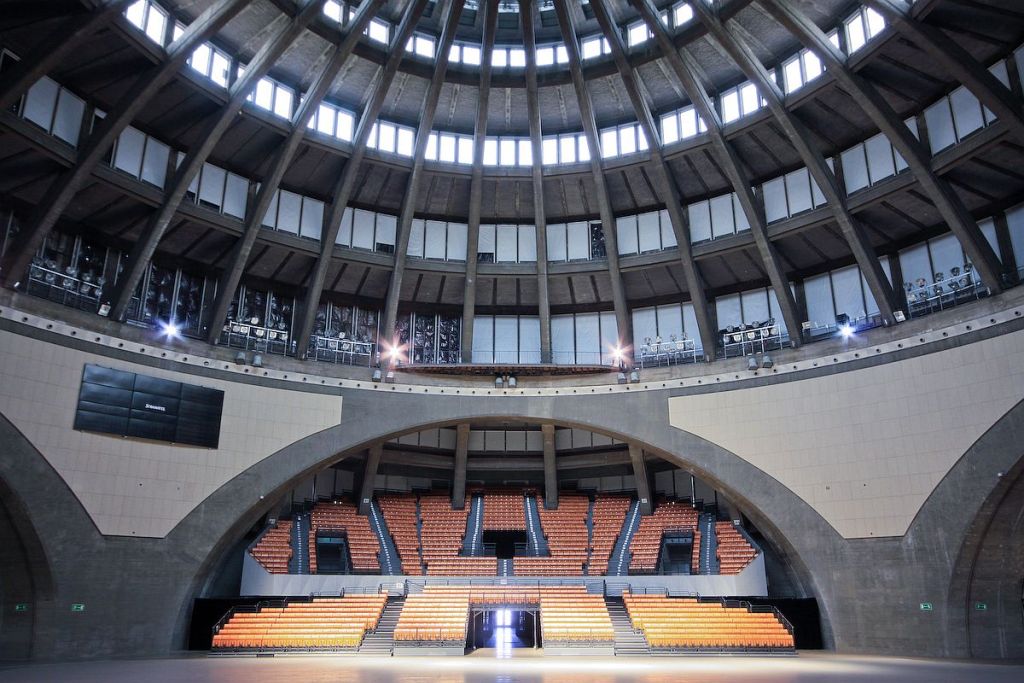 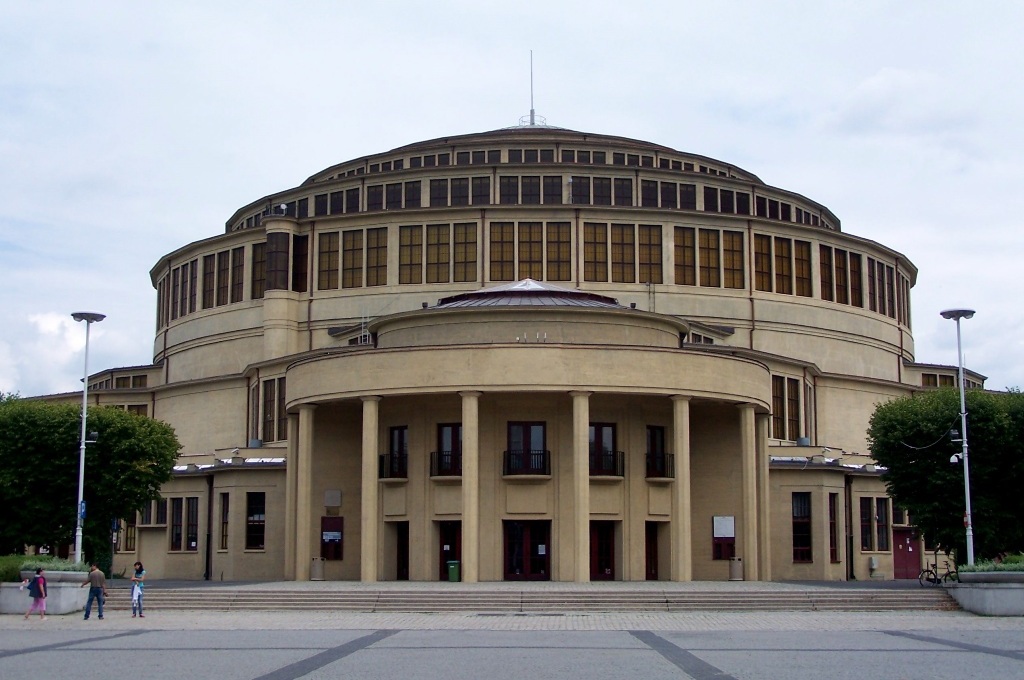 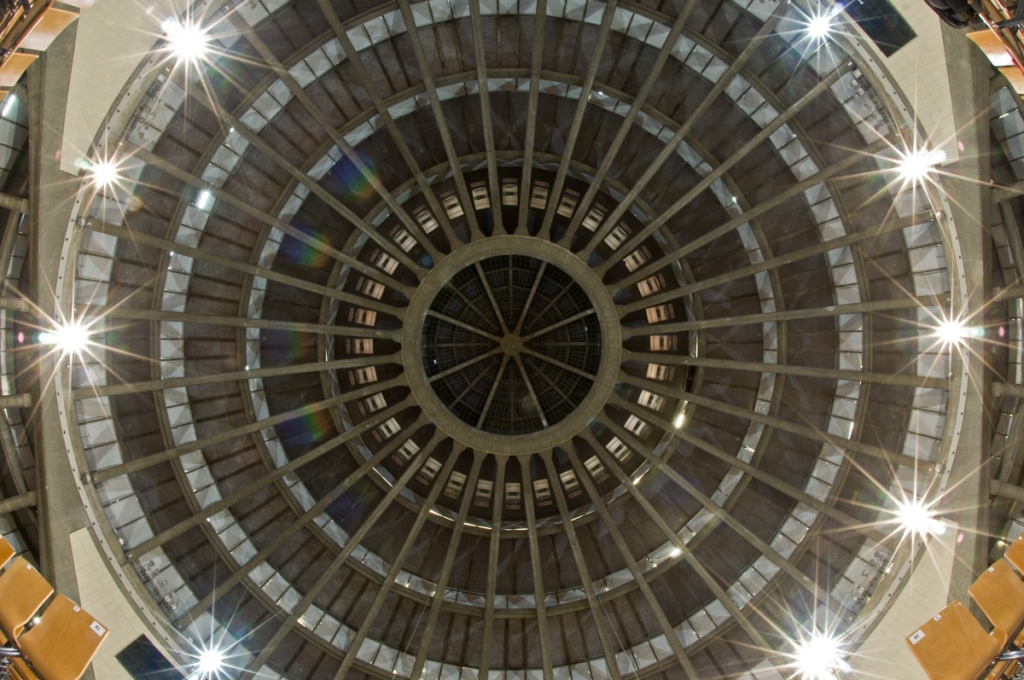 Hala Stulecia or the Centennial Hall was originally called the Jahrhunderthalle. It was designed by the architect Max Berg and was constructed according to his plans in 1911–1913, when the city was known as Breslau. At that time Silesia was part of the German Empire, but became part of Poland in 1945 and the city reverted to its original name of Wrocław.  The Communist authorities renamed it Hala Ludowa, which remained its name until it was recently renamed Hala Stulecia to match the original German name.

The foundations were completed in January 1912 and, in April, the work on scaffoldings and form works for the Hall’s four main pillars started. By September, the stage of covering the dome with concrete was successfully completed and formation of window frames and stepped tiers of walls and floors commenced. Special cement, supplied by the Silesia Cement Plant in Opole and rigorously tested, was used to make concrete. In the sections exposed to large stresses, the highest quality Strzegom granite was used. High-grade rolled steel was selected, based on the results of tests of steel strength. In December the concrete shell was presented to the City.  The cupola was made of reinforced concrete with an inner diameter of 65 m[1] and 42 m high and the dome itself is 23 m high, with steel and glass parts. Windows frames were made of iron wood imported from Australia. Originally its interiors held the Centennial Exhibition to commemorate 100th anniversary of Napoleon’s defeat at Leipzig and the Hall was originally provided with a Sauer pipe organ built by Walcker Orgelbau, which then ranked as the world’s largest. On 24 September 1913, Karl Straube was the first to play it, performing Max Reger’s Introduction, Passacaglia and Fugue for Organ Op. 127, specially composed to celebrate the occasion. Most parts of the organ were transferred to the rebuilt Wrocław Cathedral after World War II. The symmetrical quatrefoil shape with a large circular central space could seat 6,000 – 7,000 persons. After renovation in 2010, the arena is said to be able to hold 10,000 people. It appears that prior to the renovation, the colour was grey and afterwards brown.

At the time of its completion, the Centennial Hall’s dome with the span of 65 meters was the largest structure of this type in the world and surpassed the iron-framed Devonshire Dome in England and the steel and glass dome of the West Baden Springs Hotel in Indiana, USA. The Pantheon dome in in Rome, with a diameter of 42 m, had stood since 126 AD as the largest unreinforced concrete dome. However, the use of reinforced concrete construction, which was significantly lighter and stronger, enabled a much larger dome to be constructed and started a new era in concrete dome design. The Centennial Hall has served as a recreational and exhibition facility for 100 years. The structure and its monumental dome contributed to the recognition of the Centennial Hall by UNESCO and its inclusion in the World Cultural and Natural Heritage List. It was visited by the Holy Father Pope Paul II in 1997 and by His Holiness the 14th Dalai Lama in 2010. My good friend in Poland has informed me that members of his family in Wrocław often attend events at the Centennial Hall.

More information may be found at URL:  www.halastulecia.pl/en/

1.  The English version of Wikipedia incorrectly gives the diameter as 69 m.