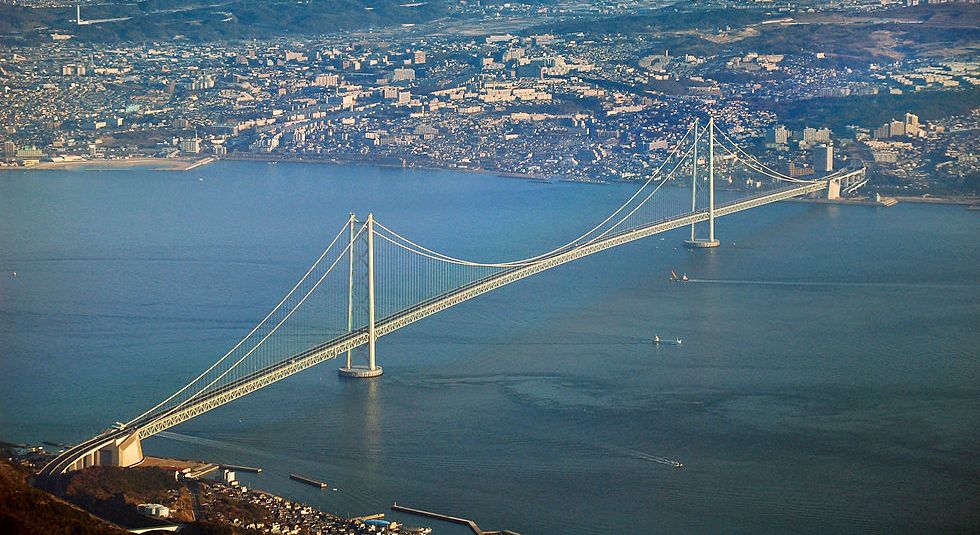 The Akashi Kaikyō Bridge (明石海峡大橋  Akashi Kaikyō Ō-hashi)[1], also known as the Pearl Bridge, links the city of Kobe on the mainland of Honshu to Iwaya on Awaji Island, in Japan. It crosses the busy Akashi Strait (Akashi Kaikyō in Japanese) and carries part of the Honshu-Shikoku Highway.

The two towers were originally 1,990 m apart, but the Great Hanshin earthquake on January 17, 1995, moved the towers so much (only the towers had been erected at the time) that the span had to be increased by 1 m.  The bridge was designed with a two hinged stiffening girder system, allowing the structure to withstand winds of 286 kilometres per hour, earthquakes measuring up to magnitude 8.5, and harsh sea currents. The bridge also contains pendulums that are designed to operate at the resonance frequency of the bridge to dampen forces. The two main supporting towers rise 282.8 m above sea level, and the bridge can expand because of heat by up to 2 m over the course of a day. Each anchorage required 350,000 tonnes of concrete. The steel cables have 300,000 kilometres of wire: each cable is 112 centimetres in diameter and contains 36,830 strands of wire.

1. The above information was edited from the Wikipedia article URL:  https://en.wikipedia.org/wiki/Akashi_Kaiky%C5%8D_Bridge